The Nanoessence project aims to examine life at a sub cellular level, re-examining space and scale within the human context. A single HaCat skin cell is analysed with an Atomic Force Microscope (AFM) to explore comparisons between, life and death at a nano level. The humanistic discourse concerning life is now being challenged by nanotechnological research that brings into question the concepts of what constitutes living. The Nanoessence project research is based on data gathered as part of a residency at SymbioticA, Centre of Excellence in Biological Arts,, University of Western Australia and the Nanochemistry Research Institute, (NRI) Curtin University of Technology.

The Nanoessence project aims to construct a physical experience to examine this scientific and metaphysical world.  Nanoessence is an interactive audio-visual installation where the viewer will interface with the visual and sonic presentation through his or her own breath. In the context of the project breath has a strong conceptual and metaphorical link to a Biblical inception of life. 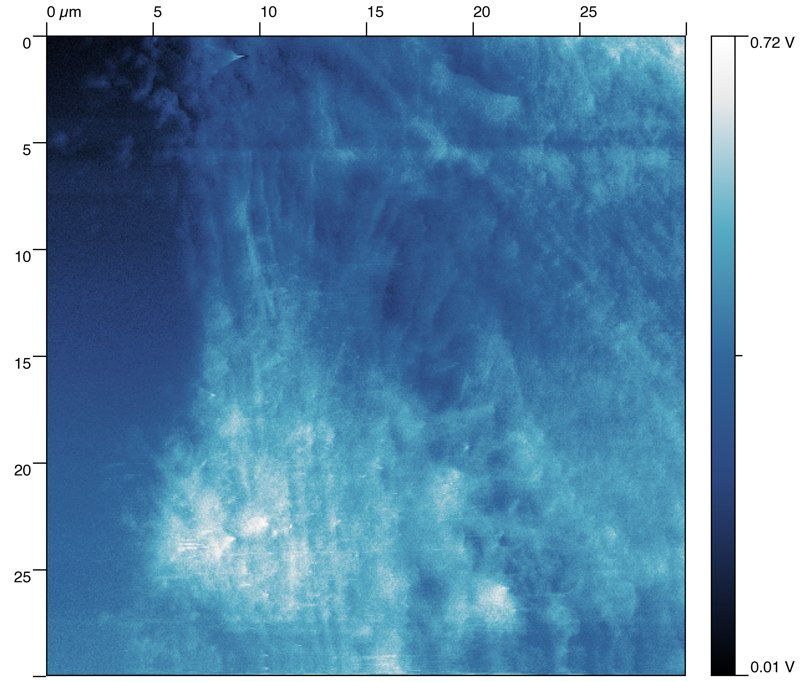 The HaCat cells chosen were immortal and therefore demonstrated the potential of endless cloning of a single cell. ‘Thus, HaCaT is the first permanent epithelial cell line from adult human skin that exhibits normal differentiation and provides a promising tool for studying regulation of keratinization in human cells’. (Boukamp, Petrussevska et al. 1988)

The AFM uses a small cantilever whose pyramid shaped tip that measures approximately 10nm is slowly lowered onto the surface of a sample. The sample is then scanned via a laser, beamed onto the cantilever tip which is reflected onto a photodiode that records the atomic surface. The concept of gathering scientific data through touch allows for a reconfiguration of a dominant ocular centric understanding of the world. The conceptnano assembly display the potential to move atoms around to create new materials, forms and structures replicating the construction of man from dust particles.

The data from the scanning process of the living and dead HaCat cell is used to create a hybrid layered environment. The layered nano topographies from the AFM skin cell scans create a large data projection display representing the essence of life and creates the basis for the hybrid metaphorical landscape.  A life form emerges from a algorithm developed by Kevin Raxworthy based on cellular automaton. The algorithm is affected via the viewers breath and moisture gained from the sensors, each breath and moister reading will create and stimulate the parameters for the essence of life to grow.

The audible topographic texture of Nanoessence is created from analysis of data recorded from the AFM in force spectroscopy mode.  The vibrations of the HaCat cell atoms are scanned initially in vitro and then a second time with ether injected in to the serum.  The resulting comparative analysis of the data is converted into  sounds files. The installation presents the auditory work which consists of sonic vibrations that occur at the nano level and will also be presented to the audience as a haptic topographic sensation. The auditory work will map out a sonic topographical relationship to the changing landscape.

The aim of Nanoessence is to promote other senses in the understanding of infinite smallness as well create a psychological shift in the viewer. Using breath as an interfacial device that initially re-orientates the viewer to identify sonically as well as visually differences between a living and dead single skin cell.

Oran Catts and Ionat Zurr SymbioticA and Dr Thomas Becker at the Nano Research Institute at Curtin University of Technology.